Time For a Change!

After the Jets traded for Tim Tebow in the offseason, I wrote a post entitled “Mark is the Man”.  I knew Sanchez was coming off his worst season as a pro, but I truly felt that he was the QB of the future for the New York Jets. I truly believed that he could lead this team for the next decade and become the player we all thought he might be after leading the Jets to 2 consecutive Championship games in his first two years.  I thought that last year’s struggles were a result of poor team chemistry, bad play-calling, misfortune and high expectations that were difficult to meet.  As of today, I stand corrected.  I can no longer support the QB I really thought would take the Jets to their first Super Bowl in over 40 years.

Let’s look at the numbers.  In yesterday’s 28-7 loss to the Seattle Seahawk, Mark Sanchez and the offense failed to score any points.  It was the third time this year that the offense failed to score a touchdown.  Sanchez went 9 for 22 for a meager 124 yards.  For the fifth time in nine games, Sanchez completed less than 50% of his passes, an absolutely terrible statistic for a professional quarterback.  As a result of Sanchez’s struggles, the Jets offense can’t generate a rushing attack either because opposing defenses can put eight and nine men in the box, knowing Sanchez won’t make them pay for playing aggressive.  Sanchez has zero confidence in himself, his coaches or his teammates and he needs to be removed immediately.

The Jets are 3-6 and still serving us a bowl of their usual “we still can make the playoffs” bullshit.  After yesterday’s embarrassment, Rex came out and said that he is sticking with Mark Sanchez.  I was in favor of that decision up until now but now it’s time to go to plan B.  The Jets have ruined Sanchez and Mark laid back and let it happen.  He has been more interested in being a celebrity than being a winning QB.  He has made piss poor decisions with the football all season long, which includes a league leading 5 interceptions in the red zone.  Yesterday, with the Jets driving and the game tied at 7, Sanchez looked right at Dustin Keller, pump faked it to him twice, and threw an off balance throw across the entire field that was easily the most telegraphed pass I have ever seen.  It was picked off, all the Jets momentum was gone and never recaptured.    Like I said, Mark Sanchez has allowed all his doubters to be correct and has done nothing to help his cause.

I can’t only blame Mark Sanchez: management did no favors for their “franchise quarterback”.  The Jets brought in the biggest media circus act in Tim Tebow and told us all he would be Sanchez’s backup.  They told us he would help push Mark, force the opposition to plan for multiple attacks and make the Tony Sporano lead Jets offense a unit to support one of the league’s best defenses.  They got Sanchez no play-makers, didn’t bolster his protection and brought back some of the same malcontents who ruined the Jets chances last season (Santonio Holmes).  Now, the Jets are left with a shattered starting QB, a back-up who can’t play, an offensive coordinator who has no idea how to utilize his roster and a coach and general manager that are on the hot seat only two years after bringing our lovable losing franchise on the cusp of two straight Superbowls.

Where do the Jets go from here?  Personally, I would like to see Greg McElroy, the Jets 2nd year QB who was a good enough passer in college to win a National Championship at Alabama, and actually beat the great Tim Tebow in the process.  Maybe McElroy could be a diamond in the rough, a QB in the mold of Tom Brady who went to a big time university but was overlooked in the NFL draft and dropped down to the 7th Round.  The Jets could throw him out in live action and see if they have a viable option or if they need to go back to the drawing board this offseason.  However, we know that isn’t going to happen.  The fans and the media want Tim Tebow to get the snaps and I believe that if it’s not McElroy at this point, then it might as well be Tebow.  If we are going to lose anyway, we might as well watch the most entertaining product available.  The Jets have turned themselves into a circus over the past three years and they might as well embrace their image.  Quite frankly, the way Sanchez has played lately, they really can’t do any worse with Timmy leading the charge.

As for Mark Sanchez, he needs a change of scenery in the worst way.  I like Sanchez and I really hope he could regain his abilities in a city which would be less critical and offer less distractions.  He might have the skill set of a backup QB, but he can’t possibly serve that role as a member of the Jets.  He doesn’t appear to be the natural leader that Rex Ryan and Mike Tannenbaum sold him as…the type of leader the Jets traded their entire draft class to land in 2009.  He’s given us some good times, but lately he’s given us a mixture of inconsistent and downright terrible play.  Jets fans and Mark Sanchez will both benefit from a fresh start.  So, like a man, I can admit when I was wrong and in stating that Mark Sanchez should be the starting QB of the New York Jets going forward, I was incorrect.  Rex Ryan, it’s time to make the decision that everyone, probably even Mark Sanchez, wants you to make and call in the lefty (or Greg McElroy!) from the bullpen… 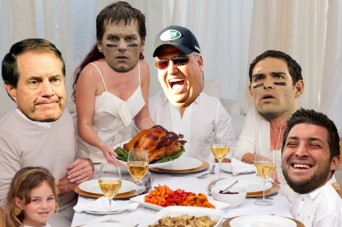 Will the Jets get Belichick-aches or the Pats a dirty Sanchez?

Thanksgiving is my favorite day of the year, hands down.  It’s a day I relax, eat great food, see family and friends and watch football from 12 p.m. to midnight.  The NFL’s addition of a third game on my favorite holiday is something I have been extremely thankful for the past few years.  Very often, dinner is served during the second game, and in many years past, I have been unable to catch all of the action, especially before the days of Tivo and DVR.  The third game (and these fantastic inventions) have really allowed me to enjoy a full slate of football all day and night.  However, this year the NFL schedule makers have decided to ruin my holiday and play a sick joke on al New York Jet fans.

Not only are they putting the Jets in primetime on Thanksgiving night, but they have decided to match us up against the arch-rival Patriots.  In the past two years, I would have been extremely pumped for this game, envisioning the Jets finally taking over the reigns of the AFC East.  However, I just can’t see how this year will end up any different.  Tom Brady vs. Mark Sanchez/Tim Tebow?  Belichik vs. Ryan?  A world-class organization vs. the NFL’s biggest soap opera?  All of these factors lead to one thing…My favorite day is certainly going to be tarnished this year!

Part of me is thinking about boycotting the game completely.  Maybe I’ll head down to the local mall and try to beat the black friday crowds.  I might also try to eat myself into a food coma and therefore pass out well before kick-off. It’s possible that I can drink enough beer and wine that it will be physically impossible to see the game, and I can make up the outcome in my inebriated state.  All I know is after eating and drinking all day, being subjected to the beat-down that I am already bracing myself for, will make the task of keeping my food down almost impossible.  This year I will fully enjoy the Macy’s parade, because I know that my day will probably only go down hill from there.  Thanks a lot NFL!

Jets and Prayer – Perfect Together?