They are just so dreamy!

When you think of the USA Men’s Basketball Olympic Team, you immediately remember the 1992 “Dream Team.”  The 1992 team was the first American team to feature active NBA players and is considered the greatest team ever put together in any sport.  Let me break it down for you. The Dream Team consisted of Michael Jordan, Charles Barkley, Larry Bird, Magic Johnson, Patrick Ewing, Karl Malone, John Stockton, David Robinson, Christian Laettner, Scottie Pippen, Clyde Drexler, and Chris Mullin.  Unless you live in a shell or have never heard anything about professional basketball you should have heard of majority of these players.  The USA coasted through the Olympics embarrassing country after country and letting the world know that this is America’s sport and no one will change that.  Even though the USA is ranked the #1 in the FIBA world rankings, they have found it difficult to portray the same dominance that they showed in the 90’s.

Balls of Bronze – the clanking heard round the world.

In 2004, the USA finished with an embarrassing bronze medal and received criticism from a country that does not accept anything but gold in this competition.  If we lose a gymnastics competition or two who cares, but the basketball team must bring home the gold.  The 2008 team redeemed the 2004 team’s failure by winning it all and restoring balance to the basketball world.  This afternoon the 2012 squad was announced and I have to say that as an American I am very proud of the team we are sending to the London Olympics.  Led by veteran’s Kobe Bryant, Lebron James and Carmelo Anthony, the USA will look to sweep through these Olympics with what I feel is the best team since 1992.  Besides the three I have already mentioned, the USA will have the talents of Russel Westbrook, Chris Paul, James Harden, Kevin Durant, Blake Griffin, Andre Iguodala, Kevin Love and Tyson Chandler.

A lot of people look at this team as undersized and inexperienced, but what I see is a team that is built for the modern-day game.  If you read the names of the 2012 team you will find only one true Center in Tyson Chandler and then no other dominant big men.  Don’t try to come at me with Blake Griffin and Kevin Love because neither of them represent the typical big man that NBA fans are used to.  They are both great players in their own rights, but players like Ewing, Robinson, Barkley and Malone are true big men.  Some people will look at this like a negative, but with the way that international basketball is played now, the big man is a formality and no longer a necessity.

This is Carmelo, Kobe and Lebron’s third Olympics that they are playing together so the veteran leadership is present and accounted for.  For some reason there are some skeptics out there that feel this year’s squad can’t match up to the 2008 team.

“They are just like us, they also have players with a lot of talent,” the Oklahoma City power forward said Saturday in his first full day of training with the Spanish team. “They are a different team to 2008, but their players are still very good.”  I hope that the USA team doesn’t take condescending comments like this lightly.  Sure Spain finished with the silver medal back in 2008, but there is no way they think they can actually match up with all of the best scorers in the NBA.  The NBA scoring champion 7 out of the last 8 year’s is currently on the USA team.  I honestly feel that the roster that we have going into the Olympics could have competed with the Dream Team.  Now I am not saying they would have beaten the Dream Team, but any game between them would have definitely been competitive.

Chris Paul thinks that this team is much better than the ’08 squad.  “When I think about ’08, we were really good then. But like me, LeBron and D-Will, all of us talk about, you’ve got to think about how much better all of us are now than we were in ’08,” Paul said. “All of us as players, we shoot the ball better. Guys are more athletic, guys are more confident. One through 12, no question we’re deeper than we were in ’08.”

We work Harden most!

If you didn’t notice, OKC will have their big 3 on the roster and James Harden couldn’t be more proud.  “Great characters, workaholics, just humble guys, humble guys and blessed to be in this position,” Harden said of himself, Durant and Westbrook. (Guys) who work hard and just set ourselves up for greatness and to achieve, and just to be on the same team with these guys means a lot.” 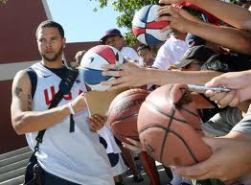 Spirits are up and the gold medal is America’s to lose.  Will all of these high expectations be too much for America to handle?  I think not.  I expect to see the USA dominate throughout the Olympics and bring home the gold.  If that doesn’t happen it will be considered on of the biggest tragedies in American basketball history.  How do you feel this USA team will finish the 2012 Olympics?

Error: Twitter did not respond. Please wait a few minutes and refresh this page.