We Love Our Fathers!

There is nothing in this world more enjoyable than sports, and there is no better way to enjoy sports than with your father.  For the Sports Debaters, we can give all the credit for our love and interest in sports to our fathers Bruce and Peter.  So first off, Happy Father’s Day!  Memories from your first catch in the back yard, to the first sports team you ever tried out for, to the first trophy you ever won will stay with you forever and we just want to thank our father’s for pushing us and always being there for us for these momentous occasions.  You may have seen either Bruce or Peter commenting on our articles trying to keep us on our toes and we couldn’t appreciate it more.  This article is dedicated to them!

The baseball great Harmon Killebrew once said, “My father used to play with my brother and me in the yard. Mother would come out and say”, “You’re tearing up the grass.” “We’re not raising grass,” my dad would reply, “we’re raising boys.”  This is the sort of thing our fathers would have said, followed with a quick apology of course, so that is why this article is being written for them.  Below is a handful of the greatest father-son athletes in their respective sports.  The list is nearly endless so we chose one combination from 5 different sports and we would love it if you added to the comments page with famous duo’s that you think deserved to be on this list. 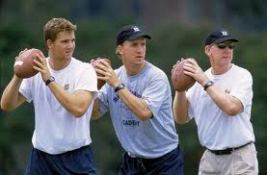 Three unbelievable quarterbacks with a combined 15 Pro-Bowl selections and 3 Superbowl victories, the Manning’s are without question the greatest father-son’s trio of all time.  I know this article is for duo’s but how can you leave this family off of it.  Archie had the unfortunate disadvantage of playing for a terrible team his entire career.  Even though he had a losing record for his career, he was still respected as a very good quarterback.  As for Peyton and Eli, if you don’t know about them then you are probably on the wrong website.  Peyton is set to begin the second part of his career with his new team the Denver Broncos and Eli is coming of winning his second Superbowl.  Both Eli and Peyton have proved to be not only great athletes on the field, but they both showed their surprisingly funny comedy chops in numerous commercials as well as both hosting Saturday Night Live.

These two amazing athletes not only mastered the same sport, but they actually played on the same team for a short period of time.  Ken Griffey Sr. started his career with the Cincinnati Reds where he went on to make 3 all-star teams and won back-to-back World Series (1975-76).  After traveling through the Yankees, Braves and back to the Reds, KG Sr went on to finish his storied career with the Seattle Mariners.  His final move to Seattle was historic because it paired him with his son Ken Griffey Jr.  I am sure that even Senior would admit that his son definitely had one up on him.  Junior, or “The Kid”, was one of the best all-around baseball players of all time.  6th on the list for most home runs ever and 10 Gold Gloves playing Center Field make Junior a shoe-in for Cooperstown.  After his retirement, the Associated Press went on to say, “In his prime, Ken Griffey Jr. was unanimously considered the best player in baseball.”

Joe “Jellybean” Bryant was the greatest NBA player to ever wear the #23…just kidding, but he did go on to have an above average career both playing and coaching.  Drafted out of La Salle University by the Golden State Warriors, Jellybean went on to play for 3 different NBA teams and 5 different teams overseas between Italy and France.  He has most recently found himself as a coach in the WNBA for the Los Angeles Sparks during the 2011-12 season.  Now I don’t know if you have ever heard of his son, Kobe Bryant, but he is pretty good.  Kobe has won 5 NBA Championships and continues to be one of the best players in the NBA year after year.  He has made 14 all-star games and went on to win the NBA MVP back in 2008.  Kobe will go down as not only one of the best players in Lakers history, but NBA history as well.

Bobby Hull is considered the greatest left winger to ever play the game and arguably the best player period.   Bobby was famous for his blonde hair, blinding skating speed, and having the hardest shot, which is how he earned the nickname “The Golden Jet.”  He won the Stanley Cup with the Chicago Black Hawks back in 1961 and went on to lead the league in goal scoring a remarkable 7 times in the sixties.  Bobby was elected to the Hockey Hall of Fame in 1983.  Bobby’s son Brett wasn’t too shabby himself.  Brett has the third most goals in NHL history (741), with one of them being the game winning goal on Dominik Hasek to win the 1999 Stanley Cup, which was the first one in the Dallas Stars history.  Brett went on to win the Cup with the Red Wings in 2002 and was appropriately nicknamed after his father as “The Golden Brett.”  Brett joined his father in the Hall of Fame in 2009. 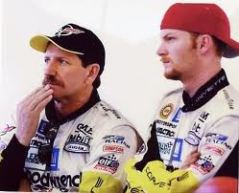 Dale Earnhardt Sr is without question one of the greatest race car drivers of all time.  During the course of his career, Earnhardt won a total of 76 races, including the Daytona 500 in 1998. He earned seven championships, which is tied for the most all time with NASCAR great, Richard Petty.  His aggressive driving style earned him the nickname “The Intimidator,” as well as leading to his tragic death after a horrific crash while racing in the 2001 Daytona 500.  His son continued the family legacy by building a respectable career of his own.  With an estimated net worth of $300 million, Junior has gone on to win the “Most Popular Driver Award,” a record 9 times.  Junior won the Daytona 500 in 2004 and has done his best to honor his father in everything that he does.

We hope you enjoyed reading all of these great father-son duos in sports and we encourage you to call your fathers on a daily basis and remind them that it is them who have helped form who you are today.  We also want to give a shout out to our grandfathers Herbert Simon and Eugene Riback, for they have been fathering way longer than our dads.  Feel free to let us know about any other duos that you feel were unjustly left off this list and we just want to wish every father out there a Happy Father’s Day!

Offense on the Defensive

I’m just throwing this so the defense has something to chase.

San Francisco 49ers quarterback, Alex Smith, has made it abundantly clear that he does not believe offense wins games.  Not really what you want to hear from the leader of your offense.  In a recent interview, Smith said that he does not think big stats equate to wins…well they don’t really hurt either.

“I could absolutely care less on yards per game,” Smith told a group of reporters. “I think that is a totally overblown stat because if you’re losing games in the second half, guess what, you’re like the Carolina Panthers and you’re going no-huddle the entire second half. Yeah, Cam Newton threw for a lot of 300-yard games. That’s great. You’re not winning, though.”

Don’t slam Cam the man or I’ll Beason sticky on your ass.

After hearing this comment about his quarterback, Carolina Panthers Linebacker Jon Beason tweeted,  “Alex smith, don’t hate on Cam (because) your stats would’ve gotten u cut if Peyton decided to come 2 San Fran. Truth b told. That’s after a 13-3 yr.”

I found this to be one of the funniest things I have ever heard.  The sad part is that it is painfully true.  Alex Smith led his 49ers to win the NFC West and make it all the way to the NFC Championship game where they eventually lost to the Superbowl champion New York Giants.  San Fran was one of the many teams that went after the coveted free agent Peyton Manning.  There is a lot of validity to what Smith is saying about stats being over hyped, but demeaning what Cam Newton did for last year’s Carolina Panthers was an unnecessary low blow. 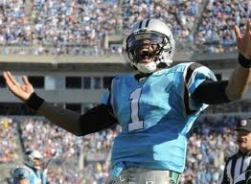 Win or lose, it’s the winners that count.

Drew Brees, Tom Brady, Matthew Stafford, Eli Manning and Aaron Rodgers were the top 5 QB’s in passing yards this past season.  All five of them made the playoffs and had successful seasons.  Eli even went on to lead his team to win the Superbowl and was given the MVP award for the game.  I am a strong believer that defense wins games in the long run, but it is impossible to win it all without a fundamentally sound offense.  I honestly think that if Cam Newton and his offense had the defense supporting him that Alex Smith had this past season, then Cam would have been lifting that trophy instead of Eli.  I might be a little biased based on the fact that Cam Newton absolutely killed it for my fantasy team this past year, but Alex Smith should just keep his mouth shut and let his defense keep winning games for him.

In this past season, Alex Smith had less passing yards than QB duds like Mark Sanchez and Rex Grossman.  Smith was 27th in the league in yards per game, with less than 200, and he threw for a dismal 17 total touchdowns.  Maybe Smith should start caring a little more about stats because he will find himself riding the bench soon enough with those numbers.  Winning your division is great and a 13-3 record is nothing to laugh at, but whether you finish last in the league or you lose in the Superbowl the end result is the same.