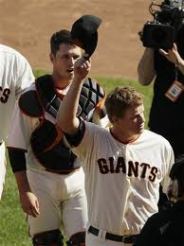 Late last night, San Francisco Giants Ace, Matt Cain, threw the franchise’s first ever perfect game.  27 up and 27 down, Cain might have pitched the most impressive statistical perfect game ever.  With the highest pitch count in a perfect game ever (125), Matt Cain becomes the 22nd pitcher to ever accomplish this epic feat of not allowing a base runner.  In fact, Cain matches the most ever strikeouts pitched during a perfect game with 14, and he now finds his name alongside Giants greats Christy Mathewson, Juan Marichal and Gaylord Perry as a member of an exclusive Giants club that have thrown no hitters.  In front of his sold out home crowd of over 42,000 screaming Giants fans, Cain threw his arms up as the Astro’s pinch hitter, Jason Castro, grounded out to third for the final out of the game.

“This is incredible right now,” Cain said. “It was unbelievable. The guys did a great job making it, in a way, kind of relaxing, because they were able to get on the board early.”

Cain was absolutely masterful from start to finish but he did have to be bailed out with a couple of great plays behind him.  Melky Cabrera and Gregor Blanco both made unbelievable catches in the outfield to ensure that Cain would finish his historic night.  And you will find out as you keep reading why a quality defense is essential to a perfect game.

“Those were unbelievable catches,” Cain said. “I mean that right there, that changes the whole thing.” 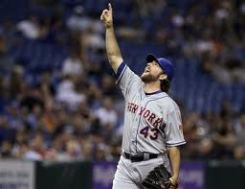 Everything went right for Dickey, except Wright.

Usually a perfect game would dominate the headlines as there has only been 22 of them in the history of baseball, but last night the sports Gods provided their fans with nearly two doses of perfection.  Across the country from where Matt Cain pitched his perfect gem, the New York Mets RA Dickey tried to make some history of his own.  Just a couple of weeks removed from the Mets first ever no-hitter by Johan Santana, Dickey took the mound against the AL East juggernaut, Tampa Bay Devil Rays.  Dickey threw a career best 12 strikeouts over 9 masterful innings.  After the Rays first two batters of the game went down swinging at RA’s phantom knuckleball, BJ Upton hit a slow grounder to Wright at third that seemed to be playable but David mucked it and the favorable scoring of home field advantage awarded Upton with a hit.  As I watched it I thought it should have been an error but since it was the 1st inning I didn’t really care too much.  It turns out that was going to be the only “hit” that the NL’s leading Cy Young candidate would give up for the game.

Maybe the ump at Johan’s game had some of that white powder before the game? 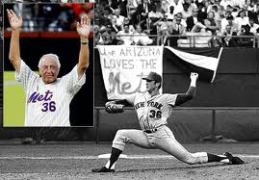 Johan was credited with the Mets first ever no-hitter, but when Carlos Beltran hit a ball that was called foul (clearly it was fair based on the picture above), many fans wanted an asterisk placed on his no-hitter.  Funny enough, the Mets are now appealing the hit/error by Upton and they are trying to get Dickey credited with the Mets 2nd ever no-hitter.  In fact, Dickey didn’t walk anyone either, and without Gold Glover David Wright’s 2 errors (or 1 error and 1 hit however you look at it), RA might have had the Mets first ever Perfect Game, joining Cain in the Hall of Fame record books.  It also shouldn’t be overlooked that while Dickey was pitching this superb game last night, he surpassed Mets great Jerry Koosman’s record for consecutive scoreless innings (31 2/3) by recording his 32 2/3 in the ninth.

Matt Cain’s night was perfect and RA Dickey’s was nearly perfect.  Cain’s perfect game marked the 5th no-hitter of the season.  This is also only the third year in baseball history that there were two perfect games thrown in the same season.  What do all of these perfect games and no hitters mean to baseball?  Are we looking at the year of the pitcher or are the hitters just getting worse?  Maybe if you read NYBobby’s take on his anti-doping article you can see why hitting numbers are down.  As a Mets fan I am thrilled with the lack of hitting against them, but as a sports fan I would love to see some of that flare from the McGwire, Sosa and Bonds eras.