Spurs of the Moment!

They got Spurs that jingle jangle jingle, as they go winnin’ merrily along…

For almost two decades now the San Antonio Spurs have demonstrated exactly what it is like to play as a team.  Year after year, the Spurs have proven that it does not matter who is in the game as long as you play as a team.  With NBA championships in 1999, 2003, 2005 and 2007, the Spurs are looking to add a fifth title to the dynasty that started when San Antonio drafted Tim Duncan as the first overall pick from Wake Forest in 1997.  Last night the Spurs finished their second straight sweep of an opponent in the 2012 playoffs and added to their win streak of 18 in a row dating back to the regular season.  In round 1, San Antonio demolished the Utah Jazz only to be faced up with the young and talented LA Clippers in round 2.  Fear of this high-flying acrobatic team that fans call “lob city,” was nonexistent in the minds of the Spurs as they won all 4 games without missing a beat.  At this point I do not see anybody being able to beat this powerhouse team, whether it be the winner of the Thunder/Lakers match-up in the Western Conference Finals or whomever they would face in the NBA finals. 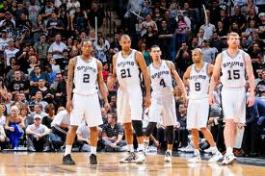 Nothing spur-adic about this team’s offense this season

Although this team is clearly led by their veterans Tim Duncan, Tony Parker and Manu Ginobli, San Antonio is a team with endless depth and can beat you from a million different angles.  Second in the NBA in scoring, fourth in assists and ninth in rebounds, the Spurs hit on all facets of basketball fundamentals.  The Spurs finished the regular season tied with Chicago for the best record in the NBA at 50-16.  The incredible thing about that is that they played relativity under the radar all year.  I guess that America has just come to expect that Tim Duncan will lead his team to success season after season.  This season was extra special for San Antonio because their expectations were a lot lower after losing in the first round of the playoffs last year.

Young and unknown, but at the top of their game. Kind of like me.

With a roster filled with relatively unknowns, San Antonio found ways this season to pinpoint each players strengths and weaknesses so they could put a solid 11-man rotation together.  Role players like Gary Neal, Kawhi Leonard, Daniel Green and Tiago Splitter have embraced their opportunities as secondary options to the Spurs all-stars.  Aging veterans like Stephen Jackson, Boris Diaw and Matt Bonner have bought into the idea of supporting rather than shinning, knowing that it will help their ultimate goal of winning a championship.  Already tasting one championship in 2007, Matt Bonner has become a huge vocal leader  off the bench, as well as providing the Spurs with a deadly 3-point shot.  When the Spurs play it is always a complete team effort and it all starts with the marvelous coaching of Gregg Popovich.

With the Lakers trailing the Thunder 3-1 in their best-of-seven match-up, it looks like the Spurs will be facing off with yet another young and extremely talented team in Oklahoma City.  I can’t bet against the Spurs right now with the way they are playing, but I do feel that OKC poses a tough match-up.  If the SAS make the finals it will most likely be against the Eastern Conference favorites, Miami Heat.  If this is how it all plays out I will really look forward to seeing the Spurs and Heat duke it out till the very end.  Regardless of what else happens for the rest of the playoffs, I think we should all pay our respects to the under-appreciated and over-achieving San Antonio Spurs.

Error: Twitter did not respond. Please wait a few minutes and refresh this page.