With last years MVP sidelined for the majority of the first quarter of the NBA season, it is safe to say that we will have a new winner of the Maurice Podoloff Trophy for the 2014-15 year. While I am sure that Kevin Durant will return to his natural form and be a dominant player once again, he just won’t have enough time this season to bolster the stats that an MVP needs. This news opens the door for some old familiar faces to regain their seat on top of the throne or even maybe some new blood making their mark in NBA history.

Some people say that the MVP award is a meaningless popularity contest, but the truth of the matter is that anyone who has won the MVP award has made it into the Basketball Hall of Fame (this obviously only includes the HOF eligible players). Here are our Top 5 candidates to claim their place among the best of the best for this season based on how they have performed through the first 20+ games.

The above stat line alone is enough to prove Curry’s skills. Steph is currently in the top 10 in the NBA in points (5th), assists (6th) and steals (8th). How about the fact that he is the best player on the team with the best record in the NBA. If you are like me and are addicted to the NBA League Pass, then you probably watch as much Warriors games as possible due to their exciting nature of game play. I haven’t enjoyed watching a team in the NBA play as much as these Warriors since the high-flying Chris Webber led Sacramento Kings 15 years ago. The “Splash Brothers” (Steph and Klay) are taking the NBA by storm and it doesn’t seem like anyone can slow them down. If the Warriors can finish as strong as they have started then there is no doubt in my mind that Curry will be this years MVP.

I will start by saying that I have never really been a big fan of Harden’s game style. Having said that, what he has done in the first 20+ games of this season has been nothing short of incredible. With the softest big man in the game, Dwight Howard, being sidelined for most of the beginning of the season due to “knee soreness,” Harden has stepped up and helped lead the Rockets to an 18-5 start (third best in the NBA). While outside of Kobe Bryant, I feel Harden is the biggest chucker the game has to offer, he has still provided a huge lift for his team. He doesn’t play much defense but he does fill the passing lane as well as anyone else in the game. His assist and rebound numbers are admirable for a selfish shooting guard like himself. He shoots a ridiculous amount of free throws a game which helps raise his PPG but if he ever wants to win the trophy that his former teammate did last year, he better tighten up his turnovers (4.2/game) and his shooting percentage (41%).

The craziest thing about The King’s stat line through the first quarter of the season is that he is actually below his career averages in pretty much every major category outside of assists. Even with this “slow” start, LeBron is still dominating in a way that only he can. His Cavaliers have seemed like they figured out their early season struggles and now they are starting to look like a younger, faster, more talented version of last years Miami Heat. James has worked diligently on perfecting his game management, and while his turnover numbers are nothing to brag about his assists (7.8/game) are his highest in five years. With any dips in Harden’s or Curry’s games, LeBron will be reeling in his 5th MYP award assuming that my 4th MVP pick doesn’t continue his historic start.

We all knew that one day Uni-brow Davis would be one of the best players in the game. What we didn’t know is that it would happen so quickly. If the Hornets had a slightly better record than 12-12 I might have put Davis higher on this list. Whether Davis gets his first MVP award or not this year, I can guarantee one thing and that is that Davis will hands-down be the Defensive Player of the Year. The offensive arsenal that Davis has along with his ability to make his opponents look foolish on the defensive end makes him one of the best franchise players in the game. I would go on to argue that Davis is the best #1 pick of the draft since Lebron. If New Orleans can stay healthy as a team and Davis can continue his torrid run, there is a distinct possibility that AD can hoist the MVP trophy come years end.

While my top 4 picks seem to make Gasol’s numbers look mediocre, the fact of the matter is that Gasol probably means more to his respective teams success than the rest of my top 5 do. Let’s try to forget about the fact that Gasol just lead his team to a very impressive victory over the 1st place Warriors to end their 16 game winning streak. Gasol is a hard-nosed athlete that does all the little things to go along with all the massive things he brings to his team. A perfect nickname for Gasol would be Mr. Fundamental but since Tim Duncan already owns that moniker, I will coin Gasol’s new nickname. I shall dub him Mr. Essential! He scores, he rebounds, he shuts down some of the best big men in the game and he does all this while rarely ever being recognized. It’s a long shot for him but who’s to say that Marc can’t claim the best of the best prize this year.

It is still extremely early in the season and these top 5 can change in an instance. I want to know if you agree or disagree with any of my picks. Let’s see what my list looks like in 20 games.

The Next NYC Sports Legend

A:  They could have had Odell Beckham Jr. on their team, and they all did something the Odell never does…they dropped the ball!

Now if you ask some of the GMs in the before-mentioned teams how they view their drafts from May 2014, I’m sure some will express confidence in their decisions.  Though Jadeveon Clowney has been hurt part of the year and hasn’t been dominant, his upside was raw talent was too much to pass up. Khalil Mack has shown Raider fans that he will be their defensive center piece for years to come and the Falcons are extremely happy with their pick of Jake Matthews to sure up their O-Line and protect their franchise QB.  Also, receivers like Sammy Watkins and Mike Evans has shown promise as well as being stars for a long time in the league.  However, all of these players will be on the list of players taken before the best talent to come out of 2014, the Sam Bowie to the Michael Jordan of NFL WIde Receivers.

The New York Giants have had by their standards a down year.  After today’s victory against the Minor League Washington Redskins, the Giants find themselves at 5-9, 5 games behind their two biggest rivals, Dallas and Philadelphia.  As the Cowboys and Eagles fight it out for the NFC East crown, the Giants are left sitting at home thinking pondering their future.  Will Tom Coughlin, two-time winning Superbowl Coach be back to lead the team next year as missing the playoffs for the 3rd consecutive year?  Will Jerry Reese, the GM who brought in the players which have lead the Giants to 2 titles in 4 years in the not so distant past, be charged with turning the franchise around?  What does the situation at QB look like, as Eli Manning looks far removed from wearing the title, Two-Time Super Bowl MVP?  However, as bleak as the current situation might be, a huge building block is in place and can give Big Blue Faithful a reason to assume that brighter days are on the horizon.

Everyone has seen the unbelievable catch Beckham made on Sunday night against the Cowboys, when he leaped 8 feet in 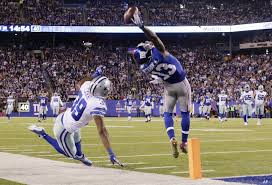 the air, grabbed a pass one-handed as if he had stick-em on his hand, ignored the fact that he had a defender pulling him down, and landed his body just in-bounds.  It was called the “BEST CATCH EVER” by many experts who have been around the game for decades.  We’re also all seen the video of Odell making one handed catches, diving, leaping and damn-near doing back-flips in pre-game warm-ups and practices.  He can throw the ball 60 yards on the line and also spin the all to himself and kick a 40 yard field goal.  He’s an athletic freak and by far the best receiver the Giants have possibly ever had on their team, no offense to Amani Toomer and Plaxico Burress.

The real story is told by his numbers on the year.  He missed the first 5 games of the year with a hamstring issue, but his rookie numbers would give you no indication that he hasn’t played every down of the season.  972 yards on 71 catches, 9 TDs and his 97.2 yards per game as second behind Antonio Brown and Demayrius Thomas, two veteran receivers who are having career years.  Beckham’s 9 TDs puts him only 3 behind the NFL leader, but considering he missed 5 games, his average of 1 TD per game is by far the best in the league.  In less games, he has more yards than Calvin Johnson, Alshon Jeffery, Desean Jackson and many other NFL veteran pro-bowlers.  Did we mention that we’re talking about a ROOKIE with LESS THAN 10 GAMES!

As a Jets fan, I am jealous but as a New Yorker, I’m excited to be able to watch a young legend make his name on the greatest stage in the world, especially in a year in which Derek Jeter gave up the New York City sports throne.  The sky is the limit, as the combination of speed, size, hands and pure athleticism is unmistakably special.  Though there are many questions to answer in Giants nation in the next few months, their is no need to worry about who the main target will be for the next decade, as Odell Beckham Jr. is ready to take the NFL by storm.