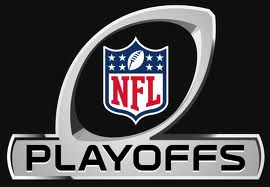 With both the Houston Texans and Green Bay Packers both winning, the Sports Debaters have started with a perfect 2-0 record in our playoff predictions.  Yesterday’s games were relatively easy to predict while today’s quality matchups are not so cut and dry.  I have to admit that while the Packers and Vikings always provide entertaining games, the battles that are happening today are the teams we were really looking forward to watching.  I mean out of the two games today there are THREE rookie Quarterbacks starting.  That is absolutely unreal!  Here are our previews and predictions for the Sunday’s NFL Wild Card games.

Indianapolis Colts vs. Baltimore Ravens:  The first contest of today’s games features two completely different squads.  The Colts enter the game as one of the youngest teams in the NFL, while the Ravens boast one of the oldest.  Indianapolis’ turn around is nothing short of remarkable as they were the worst team in the the league last year.  With the first pick of the draft the Colts chose the heavily sought-after Andrew Luck who they expected to help rebuild their once prominent franchise.  Little did they know that he would be able to return them to glory in his rookie campaign.  Andrew Luck is starting to look eerily similar to the last quality QB that led the Colts to the Super Bowl not to long ago.  The Ravens seem to always be in the AFC Playoffs and their way of getting there is usually the same strategy…DEFENSE!  Sunday will mark the last ever home game for arguably the greatest linebacker in NFL history, Ray Lewis.  Lewis announced he was retiring after this year, so the Ravens would love nothing more then to reward the dominant force with his second Super Bowl win.  We feel that this game is going to come down to how well the Ravens can manage the clock.  For Baltimore to be successful, they must be able to ride Ray Rice the entire game.  If Flacco is relied on too heavily then the Ravens will sputter.  For the Colts to win, they must clamp down on the defensive end and make sure that Rice doesn’t eat them alive.  Luck will be able to provide enough offense to give them a win so if the defense plays their part then the Colts will move on.  All that being said, we feel that the greatest story in football this year, Chuck Pagano, will have lots of Luck on his side to upset the Ravens in Baltimore. 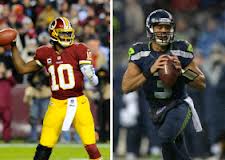 Seattle Seahawks vs. Washington Redskins:  The second matchup on Sunday is without question the most intriguing Wild Card matchup in this year’s playoffs.  Two of the most fascinating rookie QB’s in recent memory will face off in what should be a great NFC rivalry for year’s to come.  The NFL Draft had the football world buzzing this past year with plenty of potential superstars, but one player that no one was talking about after the draft was the Seahawks Russell Wilson.  In the offseason, Seattle went out on the Free Agent market and signed Matt Flynn to a big contract, so everyone thought that Wilson was being drafted to play the role of backup.  A few months and a training camp later and Flynn found himself relegated back to his familiar spot on the bench while Russell Wilson proved that he shouldn’t have been overlooked by so many.  Wilson plays with a poise that is rare to see in most veterans let alone a rookie who had to fight his way into the starting lineup.  Benefiting from Wilson’s beautiful play is Marshawn Lynch who broke out with a career year and deserves way more recognition then he has been receiving.  NYBobby and myself were talking about how sick Lynch has been these past few years yet he is never mentioned when people talk about the premiere backs in the NFL.  Wilson and Lynch are going to have a hard time finding a grove as they will be playing in a Redskins stadium that hasn’t hosted a playoff game in 13 years.  The Washington Redskins season has been quite a roller coaster as they started the season a dismal 3-6 and ended it with 7 straight wins to take the tough NFC East title.  We feel that RG3 is the front runner for Rookie of the Year based solely on the fact that he completely redefined the QB position this season.  He runs like a Pro Bowl back and throws like a Pro Bowl QB.  He manages the clock like a seasoned veteran and he seems to be making everyone around him better.  Along with RG3’s masterful play this season, we have witnessed the emergence of Alfred Morris, who looks like he will be a top back for many more years.  The back and forth combination of Griffin and Morris has confused the hell out of every opponent in the second half of the season and we are expecting nothing less in this playoff matchup with Seattle.  If the stadiums were reversed and the Seahawks had the advantage of their “12th man” then our prediction could have easily been swayed, but with the momentum that the Redskins have as well as Coach Mike Shanahan’s playoff resume, we feel that RG3 will escape this fun contest with his first ever playoff W.

Check in next week for our previews and predictions for next weeks playoff matchups and more!

This entry was posted on January 6, 2013 by MatthewToddErich. It was filed under NFL Playoffs and was tagged with Andrew Luck, Chuck Pagano, Colts vs Ravens, NFL Wild Card playoffs, Ray Lewis retiring, RG3, russell wilson, Seahawks vs Redskins.